There’s a moment at the start of Lincoln when you fear Steven Spielberg isn’t going to be able to resist going all Amistad on us and clubbing you over the head with the film’s message.

The scene is thus: following a brief prologue of Civil War carnage involving black and white soldiers (proving that everyone is equal on the battlefield), a black union soldier respectfully gibes the President about inequality. Two white unionists approach separately and in worshipful tones quote Lincoln’s Gettysburg Address (“Four score and seven years ago…”) back to him, but stumble over the final words, leaving it to the African-American trooper to complete the recital before rejoining his company.

On the face of it, this opening four minutes or so brings to mind the sort of heavy-handed approach Spielberg has so often been guilty of in his historical epics. Yet, delve a little deeper and it becomes apparent Tony Kushner’s script and Spielberg’s direction are very cleverly revealing two contrasting perceptions of Lincoln; on one side is the saintly Honest Abe figure common to school textbooks, on the other the crafty politician with a gift for oratory who nevertheless knows that deeds, not words are what’s needed.

Lincoln focuses tightly on the final four months of the Republican president’s life, centring on the politicking and increasingly frantic horse-trading that took place in the darkened corridors of power in early 1865 to secure passage through the House of Representatives of the crucial 13th Amendment to the US Constitution to formally abolish slavery. 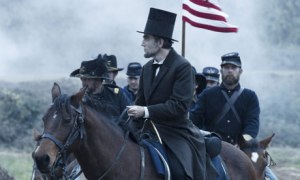 With the Civil War in its final death throes, time is of the essence for Lincoln, who is worried his 1863 Emancipation Proclamation decreeing that all slaves be freed will be thrown out by the courts once the war is over and the 13th Amendment defeated by the returning slave states of the south. Warned not to do it by those closest to him for fear of tarnishing his revered reputation, the President realises the opportunity could be lost and leans heavily on his colleagues to help him get the vote through.

Three distinct threads run through the film – the war of words in the House between Democrats and Republican congressmen enjoying the sound of their own voice, the behind-the-scenes machinations, and the strain on Lincoln’s marriage to First Lady Mary Lincoln (Sally Field) – and it’s to Spielberg’s great credit that we never lose focus of any of them.

Kushner’s witty script is necessarily talky, and it pays not to lose attention, but the enormity of the stakes is always clear and the dialogue positively crackles in the hands of probably the greatest cast assembled for any Spielberg film to date.

Tommy Lee Jones, in his best role for years, has a ball as Republican Congressional leader Thaddeus Stevens, a radical anti-slavery advocate who can’t stop himself insulting Democratic leaders for sport, but knows when to keep his cards close to his chest when the need arises.

There’s a levity to the efforts of the lobbyists to curry the Democrats’ favour, although the grave seriousness of their task is not lost, and the vote itself is expertly handled by Spielberg, who ratchets up the tension like the old pro he is.

The ideologically led politics of Lincoln serves as a timely parallel to the entrenched state of today’s American party political system where petty in-fighting and belligerence can often push progress to the sidelines.

It seems appropriate that America’s most beloved President is played by arguably today’s greatest living actor and Daniel Day-Lewis is stupendous in the title role. He plays Lincoln as a kindly uncle who chooses to win people over with an amusing anecdote or a subtle observation and, ever the politician, engages in a lot of hand holding.

Day-Lewis makes it look effortless, finding a pause here or a change of tone there to give what will probably become the definitive take on this most adored of presidents. It’s a masterclass in the power of knowing when to underplay a role, to the extent that when some of the cast look in awe of the President you wonder whether it’s actually Day-Lewis they are marvelling at.

We see a more vulnerable Lincoln when he shares private moments with Mary, who has fallen apart following the death of their son and begs her husband to stop their other sibling Robert (Joseph Gordon-Levitt) from joining the war effort. Their pained arguments are powerfully wrought, and Field is excellent as a figure who, like Abe, must compartmentalise personal grief for the good of the country.

Despite this being Spielberg’s most mature and discliplined work to date, he still can’t help himself on occasion, whether it be the rather obvious symbolism of a ticking clock and Lincoln glancing at his watch to show how time is running out, or the saccharine moment when the President walks to a window bathed in light upon hearing the vote has been passed.

Bringing to life a significant moment in the turbulent history of the world’s only superpower, who’d have thought a film where little happens for long periods could be this engrossing?