The man with “a very particular set of skills” returns to remind another cabal of evil-looking Eastern Europeans why messing with Americans is never a good idea. 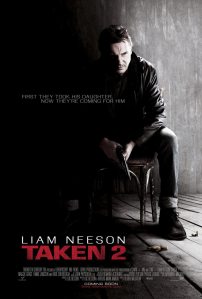 Taken was an unexpected box office smash on its 2008 release and somehow got away with reinventing Liam Neeson (he of Schindler’s List, let’s not forget) as a credible action star.

Although xenophobic in the extreme and ridiculously over-the-top in its execution, Taken had a B-movie charm that was hard to resist. The inevitable sequel picks up shortly after the events of the original, with the relatives of the dastardly sex traffikers who took Bryan Mills’ (Neeson) daughter and paid with their lives vowing to take their revenge.

Murad (Rade Šerbedžija) orders his men to find and capture Bryan, his ex-wife Lenore (Famke Janssen) and their daughter Kim (Maggie Grace). They get their chance when mother and daughter join Bryan in Istanbul, and before long all hell breaks loose as Bryan and Lenore are taken and it’s left to Kim to evade capture and help them escape (in a reversal of the original’s plot).

Taken 2 is bad, and not in a so bad it’s good way. Take away director Olivier Megaton’s glossy handheld camerawork and the multiple explosions and you’re left with the sort of straight-to-DVD cheapie that Steven Seagal peddles out twice a year. 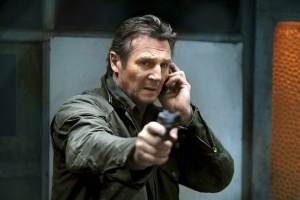 “Have I mentioned that I have a very particular set of skills? I have? Oh.”

At least Taken had a couple of memorable moments, not least of which was the “I don’t know who you are. I don’t know what you want…” telephone conversation Bryan has with his daughter’s captor, but Taken 2 feels like what it is, a lazy cash-in that throws in more of everything, including the now obligatory Bourne-aping car chase (featuring Grace whining “I can’t!” every time Neeson tells her to drive faster), while chucking narrative logic out the nearest window.

Judging by the huge returns, it’s safe to say Taken 3 will be heading our way in the next couple of years. But what next? Neeson butchering his way through the male population of Albania? Don’t rule it out. Those evil Eastern Europeans just don’t know when to quit.