I’m pretty sure I’m not the only one out there to feel a sense of crushing inevitability when browsing what’s on for the week ahead at my local multiplex.

If it ain’t got cigarette paper-thin characterisation, CGI-a-plenty and a script that’s been cooked up by ZX Spectrum then the chances of finding it playing at the World of Cine down the road are slim to none. Sure, there are exceptions to this broadly-brushed rule (awards season usually throws up something) but these are mostly needles in enormously oversized haystacks.

So when the London Film Festival comes around every October I, like so many others, gleefully part with too much cash to experience what else, beyond summer tent pole releases, exists out there on Planet Cinema.

When I say “like so many others” I really mean it as purchasing tickets for the LFF is becoming increasingly difficult. Gone are the days when you could make your selections and be virtually guaranteed of a seat. Tickets for certain films this year went ridiculously quickly. My hopes of seeing The Artist, We Need to Talk About Kevin, David Cronenberg’s A Dangerous Method and Steve McQueen’s Shame were dashed pretty swiftly, but one of the joys of the LFF is that there’s so much to choose from, you’re hardly struggling to pick something that intrigues.

One such film is Rampart. 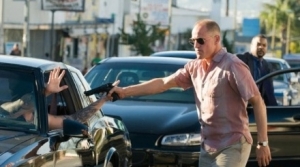 The police corruption genre isn’t one that’s been mined much in recent years (the most notable examples have been found on the small screen in such series as The Shield), but Hollywood hasn’t a bad history in the field, with the likes of Internal Affairs (1990), Bad Lieutenant (1992) and Martin Scorsese’s Oscar-winner The Departed (2006).

However, one man more than any other has stood out as a seal of quality – James Ellroy. This master of crime fiction saw his 1950s-set Los Angeles potboiler L.A Confidential turned into a one of the best American films of the 1990s, while he also penned the screenplay for the under-rated Dark Blue (2003) starring Kurt Russell.

Dark Blue was set in a LA barely in control following the beating of Rodney King and the subsequent riots that tore parts of the city apart. Although set in 1999, seven years after the riots, the LA of Rampart (based on a story by Ellroy, who also co-wrote the screenplay) is a cesspool of distrust.

The LAPD is barely keeping a lid on the city, a situation not helped by the fact that it is the source of so much hatred in the city. Part of the reason for this is because of cops like Dave Brown (Woody Harrelson). When Over we first meet Brown he’s patrolling the streets, not afraid of dispensing a very particular brand of justice to those who step out of line in his little kingdom. The control he feels he has at work extends to his personal life, wherein he picks up women in bars without a second’s thought while living next door to his two ex-wives (Anne Heche and Cynthia Nixon), sisters who are the mothers of his two disaffected daughters.

When he is caught on camera beating half to death a man who drove into the side of his car, Brown’s superiors see an opportunity to show they are cleaning house by burying a bad cop. Convinced he’s being set up, Brown decides to make life difficult for his bosses and threatens a messy lawsuit. But this is an enemy this Vietnam veteran doesn’t fully understand and as the pressure inexorably builds, Brown starts making irrational choices and gradually digs himself ever deeper into a pit there is no escape from.

Working with Harrelson again following the Oscar-nominated The Messenger (2009), Oren Moverman clearly understands his material, having had a hand in the script. Moverman also understands Harrelson, still one of the most under-rated actors of his generation, as he draws out a performance of such brutal honesty it’s sometimes difficult to watch. Harrelson’s never been one to shy away from exposing himself bare, physically and emotionally, on screen given the right material and here turns in a career-defining performance of a man who is overwhelmed on all sides and too stuck in his ways and self-destructive to carve a way out.

Harrelson is ably supported by a superb star-studded cast, including Heche, Nixon and Robin Wright as an emotionally damaged lawyer who, like others, is drawn to and repulsed by Brown in equal measure.

One of the best crime movies this century, Rampart deserves to find an audience. Hell, it might even make it to my local multiplex.

One film that I guarantee won’t be making its way there is The Loneliest Planet – and to be honest the multiplex crowd won’t be missing much. 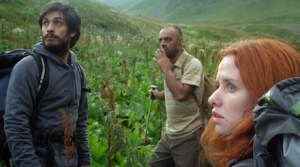 A loving couple, played by Gael Garcia Bernal and Hani Furstenberg, are travelling in Georgia hoping to get off the beaten path. Used to getting by with a smile and one or two words of the local lingo, theirs is a happy existence and the travelling you suspect is a final opportunity to see the world and live independently before marriage and babies get in the way.

They hire a local guide (Bidzina Gujabidze) to take them into the Caucasus Mountains. With the exception of the odd sheep or goat, they are seemingly all alone in this vast wilderness. But when a chance encounter goes awry following a misconstrued comment, the trust between these two young lovers is suddenly pushed to breaking point as they discover things about themselves they wished they hadn’t.

There have been a glut of films in recent years in which innocents abroad are deceived/trapped/hunted/tortured by the locals, and when you sit down to watch The Loneliest Planet you could be forgiven for half expecting it to follow in the same footsteps as the likes of Hostel.

There’s nothing wrong with slow-burn mood pieces where little of anything happens when those films contain characters you engage with.

The problem with The Loneliest Planet is that you feel little of anything towards Bernal’s or Furstenberg’s characters aside from a wish for see them get off screen as quickly as possible. Unfortunately, director Julia Loktev isn’t one to oblige and it’s almost two hours before she brings up the end credits.

Numerous shots of the couple and their guide dwarfed by their surroundings, presumably symbolising how insignificant we are in nature’s hands, promise much and the discordant, jarring strings that accompany these shots work well, but the sense of unease created fizzles out and you’re left with what is ultimately an empty exercise.