After testing the limits of our patience with the languorous The Limits Of Control, Jim Jarmusch has returned to his ironically idiosyncratic best by unashamedly injecting some arthouse into the well-worn vampire flick.

This year has seen plenty of highlights in the world of film; the return to form of Jim Jarmusch is one of the most welcome

There really isn’t anyone out there who does what Jarmusch does and for that reason alone his status as life ambassador for effortlessly cool American independent cinema is assured.

There have been some misses, for sure. The Limits Of Control (2009) disappeared up itself and Night On Earth (1991) never quite got going, but set against such fare as his breakout Stranger Than Paradise (1984), the wonderful Dead Man (1995) and hugely atmospheric Ghost Dog: The Way Of The Samurai (1999), Jarmusch’s filmography remains one to be reckoned with.

Only Lovers Left Alive finds the candy floss-haired writer/director in a rich vein (sorry) of form and leaves you wondering why he hasn’t done a vampire movie before now. As ubiquitous as this sub-genre has become, there is still plenty of room for exploration and Jarmusch casts a melancholic glance at an America that no longer exists.

Instead of chucking in werewolves or getting bogged down in tedious vampiric lore, the film’s central bloodsuckers Adam (Tom Hiddleston) and Eve (Tilda Swinton) have a loving warmth that belies the fact they’ve been effectively ‘dead’ for centuries.

Playwright Christopher Marlowe (John Hurt), looking good for 600 (or so) in Only Lovers Left Alive

In spite of being on the planet for so many years, Eve still sees wonder in the world as she walks the streets of Tangier and sources “the good stuff” from her old friend, the English playwright Christopher Marlowe (John Hurt), who has been sitting on a secret anti-Shakespeare conspiracy theorists would love.

Adam, meanwhile, is very much a glass half empty vampire and finds his only solace in vintage instruments and sound equipment, which he acquires from the eager-to-please Ian (Anton Yelchin). Adam purchases his O-Negative from Dr Watson (Jeffrey Wright), who refers to his vampire customer as Dr Faust (in a cute nod to Marlowe’s most famous play). 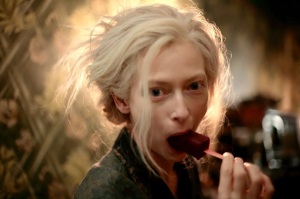 Adam lives in the industrial wastelands of Detroit and, unlike most vampires, steers clear of “zombies” (humans) whom he scolds for allowing the world to go to rack and ruin and infecting their blood with chemicals. A visit from Eve also soon brings with it an unwelcome stopover from Eve’s annoying sister Ava (Mia Wasikowska).

The relationship between Adam and Eve is beautifully handled by Hiddleston and Swinton (looking amazing for her age; maybe she went method for the role), who exude a otherwordly detachment from the world, whilst the love their characters share is exquisitely human. In spite of having been together for hundreds of years, they can still surprise each other with previously unheard stories and fresh observations (a mutual appreciation of musician Jack White being one of the more amusing ones). 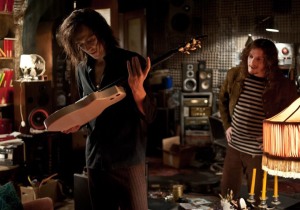 Rather than being seen as mere nourishment, the vampires imbibe on the O-Neg as a junkie would their latest fix; falling into a bliss state not dissimilar to that shown in Danny Boyle’s Trainspotting. It’s not a particularly original approach – Abel Ferrara’s under-appreciated The Addiction explored the same metaphor back in 1995 – but like so much else about Only Lovers Left Alive, its askew view keeps it refreshing.

Yorick Le Saux’s silky cinematography (the camera’s circular motion can be interpreted in several ways) and use of space is particularly striking and lends the film an artful grace, while Jarmusch’s uncompromising script may slip into bouts of self-aware pretension when name-checking the likes of inventor Nikola Tesla and composers Franz Schubert and Franz Liszt (whom we learn Adam gave music to back in the day, apparently), but manages to get away with it.

This year has seen plenty of highlights in the world of film; the return to form of Jim Jarmusch is one of the most welcome.