There’s fridge magnet philosophy a go-go in Ben Stiller’s latest about an ordinary guy with extraordinary fantasies of heroic adventure who finally decides to get busy livin’ when he embarks on a globe-trotting quest.

While there’s no denying The Secret Life Of Walter Mitty’s message will chime with many, its hero should have dreamed for something better than this

Originally a short story by James Thurber, The Secret Life Of Walter Mitty first appeared on screen in 1947 starring Danny Kaye as the titular everyman.

Apparently Thurber hated the script so much he voiced his disillusionment through the letter pages of Life, the magazine Walter (played by Stiller) works for in this remake. 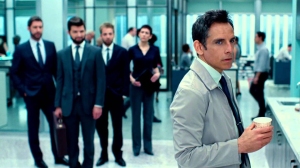 Walter (Ben Stiller) disappears into a dram world, to the amusement of his boss (Adam Scott) in The Secret Life of Walter Mitty

Bean counters with identikit suits and beards (led by Adam Scott sporting the scariest facial hair since John Travolta in Killing Season) announce that Life is being turned into a web-only publication and half-heartedly motivate the people they’re firing to make sure its final newstand edition is the best yet. Not only is Walter’s job on the line, but that of his secret crush Cheryl (Kristen Wiig) too.

As much out of a desire to impress Cheryl than a knee-jerk attempt to save his job, Walter goes in search of esteemed photojournalist Sean O’Connell (Sean Penn, obviously) to track down the edition’s missing cover image – called the “quintessence of Life”.

Walter’s quest takes him to Greenland, Iceland and Afghanistan and sees him jump out of a helicopter, almost get eaten by a shark, inadvertently skateboard towards a volcanic eruption and climb a great mountain as he finally starts living the dream instead of fantasising about it.

There can’t be many of us who haven’t, at some point, wanted to throw off the shackles of our daily lives and do the things we’ve spent so long going on about. To that end, The Secret Life Of Walter Mitty will chime with a lot of cinemagoers. Despite the stunning locations we’re treated to, however, the film ultimately feels a letdown.

Steve Conrad’s uneven script is very episodic and leads to a topsy-turvy narrative that threatens to stifle the emotional engagement you feel for Walter. In taking big strides to reach the desired end point for our hero, the film misses out on the little things that could and should have made this journey special. 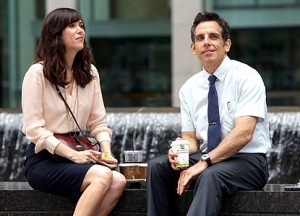 Walter (Ben Stiller) with the object of his affection, co-worker Cheryl (Kristen Wiig) in The Secret Life of Walter Mitty

A life-changing and possibly dangerous section of Walter’s journey that takes him to the top of a mountain is (literally) written-off by Stiller as a series of bland and cheesy diary entries, while his eventual encounter with O’Connell is undermined by a rather heavy-handed metaphor involving a snow leopard.

While the first section of The Secret Life Of Walter Mitty feels very much like a Stiller movie (including a weird and genuinely funny Curious Case Of Benjamin Button fantasy sequence), the second half comes off as second-rate Wes Anderson, from the use of quick zooms, to long tracking shots and stylised montage. The soundtrack also screams ‘indie’ in an attempt to give the film an edge it never really earns.

Stiller veers between low-key and over-the-top and, like the film itself, can’t seem to decide what he wants to go for. He’s a fine, if limited actor and you can’t help feeling he should have cast someone else and stayed behind the camera. Wiig, meanwhile, does her best with limited material, while the less said about the shameless plugs given to an online dating company and pizza firm the better.

While there’s no denying The Secret Life Of Walter Mitty‘s message will ring true with many, its hero should have dreamed for something better than this.