A little piece of my soul died when I finally ignored my better judgement and watched with increasing dismay as Bruce Willis took the pay cheque and trampled over one of my favourite movie franchises (fully justifying the title in the process) with A Good Day To Die Hard. 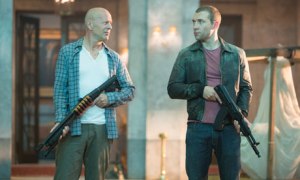 “What are we doing here again?” – The lazy cash-in that is A Good Day To Die Hard

A very pale shadow of the classic 1988 original – arguably the greatest action movie ever made – this fifth very bad day for John McClane sees him joined by his son (who’s suddenly come out of the woodwork) to “put a whuppin'” on a cabal of evil Ruskies.

It’s fair to say that none of Die Hard‘s follow-ups has matched that film’s ridiculously high standards, but the laziness and empty-headed cynicism of A Good Day To Die Hard would be incredible if it wasn’t so insulting.

A Good Day To Die Hard (we’re being promised a sixth film in the same way that children are promised a smack for being naughty) is just one of many, many terrible sequels that have soiled the good name of the original film they were so hoping to cash-in on.

In no particular order, here are five that unfortunately came to mind, although I’d love to know what you think are the worst sequels ever made.

Keanu Reeves has made some very questionable career choices over the years (Johnny Mnemonic, anyone?), but even he had the foresight to give a wide berth to this woeful ‘action’ film that, bizarrely for a film with the word ‘speed’ in it, was largely set on a boat capable of travelling only slightly faster than the milk float used in Father Ted‘s hilarious homage to Speed. Sandra Bullock at least had the stones to admit it was terrible, although to claim anything else would have been unwise.

Never has a title been so accurate. William Friedkin’s 1973 original is still regarded as one of the greatest horror films ever and still has the ability to unnerve 40 years later. The only thing memorable about John Boorman’s follow-up, however, is just how massively ill-judged it is. Not even Richard Burton can save what ended up being an unruly mess of confused and conflicting themes thrown together by a director who recut the film, but found out to his cost that a stinker’s a stinker whichever way you package it.

Although hardly a work of art, 1994’s The Mask did at least boast star-making turns from Jim Carrey and Cameron Diaz and a zany plot that matched its lead’s hyperactive temperament. This afterthought made more than a decade on sees Jamie Kennedy donning the mask while impregnating his wife, with the resulting baby-related ‘comedy’ being more unnerving than anything else. It’s safe to say Kennedy’s no Carrey and this is about as far from “smmmookin’!” as you can get.

Currently in that special club of films with a 0% rating on Rotten Tomatoes, it’s unlikely this sequel to the cult 1986 original (which itself lost money) is going to win critics over from now until the end of time. As well as having a plot so nuts you’ve got to wonder how on Earth (or the Highlander’s home planet Zeist) it ever got the green light, Christopher Lambert can’t act, Sean Connery (who had his head lopped off in the first film, lest we forget) can’t be bothered and Michael Ironside can’t be controlled. Who wants to live forever? After watching this, not me.

We were told that ‘This Time It’s Personal’. Hollywood movies have never tried too hard to strive for authenticity, but dreaming up a storyline in which a great white shark stalks the Brody clan from the United States to the Bahamas in a bloodthirsty attempt at revenge is pushing it. The film co-stars Michael Caine (who at the time would have read the phone book had there been money involved), who had this to say: “I have never seen it, but by all accounts it is terrible. However, I have seen the house that it built, and it is terrific!”

Thank god for Christopher Nolan. Before Batman Begins reinvented the comic book movie, director Joel Schumacher was busy burying the Dark Knight under a garish pile of camp costumes, ridiculous plotlines, bad acting and terrible Arnie one-liners with what in effect was one long advert for peddling lunch boxes to kids. Summing it up better than I ever could, comedian Michael J. Nelson wrote in his book Movie Megacheese: “Batman & Robin is not the worst movie ever. No, indeed. It’s the worst thing ever. Yes, it’s the single worst thing that we as human beings have ever produced in recorded history.”

There are lots more awful sequels to choose from, unfortunately? What are yours?