The desperate search for fulfillment that so preoccupies the leading men of Alexander Payne’s films finds its zenith in this beautifully crafted elegy to small town America. 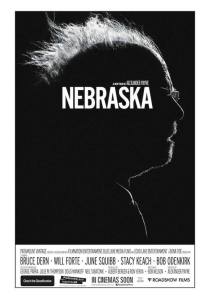 Tragic and melancholy; funny and touching, Nebraska is another triumph from one of cinema’s most richly distinctive voices

Life has worn each of them down, but not as much as Woody Grant (Bruce Dern), the grizzled geriatric at the centre of Payne’s bittersweet and understated sixth feature Nebraska.

Father and son, Woody (Bruce Dern) and David (Will Forte) hit the road in Nebraska

We’re first introduced to Woody as he’s shuffling along the highway – as lost and enigmatic a figure as Paris, Texas‘ Travis Henderson. The reason for his wanderings reveals itself when he explains to his son David (Will Forte) that he was on his way to Lincoln, Nebraska, to collect a $1m sweepstake prize he has supposedly won.

Against his better judgement, David agrees to drive his father to Lincoln despite knowing the letter he received is almost certainly a scam. Their trip takes them through Hawthorne, Woody’s dead-end home town, where they visit relatives and bump into his old business partner Ed (Stacey Keach), before being joined by Woody’s outspoken wife Kate (June Squibb) and David’s brother Ross (Bob Odenkirk).

Following the fine tradition of the road movie, an emotional journey is taken alongside the physical one as the wall of ice that has built up around Woody and David begins to thaw and the son begins to understand and come to terms with the father.

The film may be gloriously shot by Payne’s longtime DP Phedon Papamichael in magnificent monochrome, but that’s the only thing black and white about Nebraska. 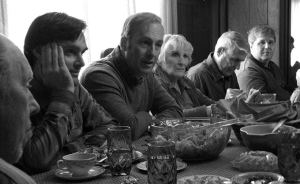 Payne’s blacky comic script doesn’t pull any punches and makes subtle observations about self-entitlement and the quiet desperation many of us feel for something to go our way.

Asked what he would do with the $1m, Woody shrugs his shoulders and can only think of buying a new truck and an air compressor. In spite of having a limited shopping list, what really motivates Woody is the thought of finally having something substantial that’s his and no-one else’s.

When Woody lets slip his impending payday while in Hawthorne, he becomes an overnight local celebrity; a development he appears both confused and quietly pleased about. While many are genuinely pleased for Woody, others, Ed in particular, try to pressure him into making good on old debts he’s supposedly accrued.

It’s a rich and nuanced performance from Dern, easily the best he has given for many, many years. Woody isn’t a terribly likeable character, but he’s all-too-human. We, along with David, discover what a flawed man he is through the many mistakes he’s made over the course of a long life; but equally we get a sense of the terrible childhood he must have endured and the scars left by war that carved him into the man he has become.

David sees the road trip as a chance to finally get to know his father. Certain home truths are tough to hear; most notably Woody’s matter-of-fact explanation that love “never came up” when it came to marriage to Kate and that they had kids because he “liked to screw”. David is also more alike to his father than he would care to admit; both are stubborn and lead unfulfilled lives.

A veteran of Saturday Night Live, Forte navigates the demands of a dramatic role with ease and plays wonderfully off Dern. The looks of mild confusion and annoyance he shoots at Woody are nicely counterbalanced later in the film by the pride and childlike love he displays.

Payne has a natural skill in handling actors and also helps to bring out great performances from Keach, Odenkirk and Squibb, who gets to let her hair down (and lift her skirt up, but we won’t go into that) with a wonderfully written role.

Tragic and melancholy; funny and touching, Nebraska is another triumph from one of cinema’s most richly distinctive voices.