It’s been almost 20 years since Oliver Stone’s outrageously provocative indictment of our obsession with media-fed celebrity and violence grabbed its own set of headlines, but if anything it’s become even more prescient.

As fearless as it is bombastic and problematic, it’s unlikely we’ll see the like of Oliver Stone’s Natural Born Killers again

With each new school shooting, massacre and serial killer, America’s news networks have sunk to new depths and served up opinions and conjecture as ‘factual’ prime time entertainment to a public drawn to the grisly details like a moth to a flame.

Oliver Stone, one of America’s most polarising directors, has long explored humanity’s black heart and loss of innocence in the likes of Platoon, JFK and the under-appreciated Talk Radio, so it came as no surprise when it emerged he was making his most controversial film to date in Natural Born Killers.

Originally written by a pre-Reservoir Dogs Quentin Tarantino, Stone dramatically altered the tone of the script from popcorn action to a polemic attacking what he saw as the insidious and cynical devolution of the media from a fair and balanced news provider to a ratings-chasing entertainer that glorifies the violence it purports to condemn. 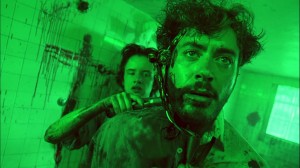 Drawn together by a common desire and abusive childhoods, lovers Mickey and Mallory Knox (Woody Harrelson and Juliette Lewis) hit the road and embark on a frenzied killing spree that captivates the sensation-hungry media machine, encapsulated by bloodthirsty tabloid journalist Wayne Gale (Robert Downey Jr) and his rabid TV show American Maniacs (which he describes as “junk food for the brain” for “those dim wits out there in zombieland”). Regarded as “the best thing to happen to mass murder since Manson” by his deluded fans, Mickey and Mallory’s notoriety only increases with each new massacre and explodes after they’re captured and locked up in prison, run by Warden Dwight McClusky (Tommy Lee Jones).

If you thought JFK was a cinematic smorgasbord, Stone and cinematographer Robert Richardson give us one of the most hyperactive and kaleidoscopic movie experiences ever committed to celluloid. Switching frenetically between colour, black and white, video, Super 8, CCTV, slow motion, projection, red lens, green lens and animation, it’s nothing if not eye-popping.

The late Roger Ebert said of the film: “Seeing this movie once is not enough. The first time is for the visceral experience, the second time is for the meaning.” Re-watching Natural Born Killers, I was able to get past the “visceral experience” and realised that Stone was trying to portray events through Mickey and Mallory’s crazy perspective. When we see the animated Mickey looking the cool hero, for instance, it’s how he sees himself.

Stone depicts his central pairing as an unstoppable force of nature relentlessly careering down “the road to hell”. When Mickey escapes prison for the first time, he jumps on a horse and symbolically rides towards a tornado. Likewise, they seem to float above those seeking to drag them down to the gutter, especially the parasitic Gale who sees Mickey and Mallory as his ticket to the big time. When Mickey poetically announces that “only love can kill the demon” during a live interview, Gale cheapens the moment by going to commercial, where an ad for Coke duly pops up.

Mickey and Mallory Knox (Woody Harrelson and Juliette Lewis), “the best thing to happen to mass murder since Manson”, in Natural Born Killers

Images of sex and violence are projected in the background and dominate the airwaves, including footage of Scarface (an odd choice considering Stone wrote the screenplay). Also, Mickey and Mallory each have ying and yang tattoos to show their “extreme light and dark” sides, but they could just as easily represent the interdependence between their killing spree and the media’s insatiable blood lust.

However, for a film seeking to throw a cautionary spotlight on where we are and where we’re heading, Stone undermines his message in the way he depicts the moments of violence. Within the first five minutes, we’re shown a highly stylised scene of brutality visited upon the staff and customers of a diner, including an arresting tracking shot of a bullet fired from Mickey’s gun that dramatically stops in mid-flight before ending up in a cook’s head, and another tracking shot of a knife sent spinning slow motion through a window and into its victim. Crudely, Stone has the rednecks leer and grab at Mallory as she dances next to a jukebox, suggesting they’re asking for it. 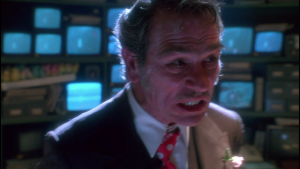 Stone would argue he’s seeking to project such violent scenes through the prism of satire, but when every cinematic trick in the book is adopted it’s difficult not to conclude he’s having his cake and eating it.

The excellent Harrelson and Lewis walk a fine line between being frightening, charming and sympathetic, while the manically over-the-top Jones and Downey Jr are deliciously sleazy and Arliss Howard’s angel of death on Mickey and Mallory’s shoulders is all the more unnerving for how underplayed it is.

As fearless as it is bombastic and problematic, it’s unlikely we’ll see the like of Natural Born Killers again, while for all his faults we need more directors like Oliver Stone to make us think, however unsubtle the message might be.