This is my latest contribution to The Big Picture, the visually focused film magazine that proves there’s more to film than meets the eye. The Big Picture is running a series of features and reviews throughout April with the theme of ‘health and illness’. This piece is part of the site’s Lost Classics section (featuring in my list of Great Films You Need To See), in this case the Todd Haynes’s underseen modern horror Safe.

There’s something horrifically unsettling about being eaten away by something neither you nor seemingly anyone else can fully comprehend.

Released in 1995 but set eight years earlier, Todd Haynes’ sublime Safe was originally meant as an AIDS allegory. More than two decades later, the film feels even more prescient, even more nightmarishly potent as the pace of change continues at bewildering speed.

Safe is ostensibly about the meek and vanilla Carol (Julianne Moore) succumbing to what she and we later understand is ‘environmental illness’, a debilitating reaction to the various pollutants, chemicals and god knows what else that are as much a part of modern living as climate change.

However, Haynes’ first true masterpiece is also an unblinking critique of the emptiness of western suburbia as well as a quietly damning indictment of the fraudulent touchy-feely self-help racket that charges top dollar without the results to match.

Following a series of warning signs (the first thing we see her do is sneeze), Carol is overcome by a coughing fit while driving her car. Her doctor is as befuddled and nonplussed as her husband (Xander Barkley), while her psychiatrist is equally clueless as to how someone whose seemingly stress-free and privileged life (the most worked up she gets is over an incorrectly coloured new couch being delivered) could physically deteriorate so dramatically.

The second half of the film sees Carol moving from her affluent San Fernando Valley home to a self-ascribed healing centre in the desert run by Peter Dunning (Peter Friedman), a self-help guru whose true motivations we suspect are encapsulated in the mansion that looks down on the wood cabins Carol and her fellow residents stay in.

Although largely full of positive, friendly people collectively living with multiple chemical sensitivity (MCS), the retreat is just that, an escape from the outside world that allows for plenty of motivational talking from Peter but doesn’t appear to provide a magic wand. Indeed, her physical symptoms, if anything, deteriorate further while the death of a resident offers a sobering tonic.

Likewise, the awkward, rambling speech Carol gives at her surprise birthday party near the end of the film about no longer hating herself and the importance of MCS awareness smacks of Kool-Aid platitudes to the extent that she literally runs out of things to say and ends up staring blankly at the others.

The film’s doom-laden tagline – “In the 21st Century, nobody will be safe” – and its theatrical poster featuring a spookily dressed resident of the retreat may seem like misleading marketing, but there’s a genuinely unsettling edge to the film.

Employing the austere aesthetic of Kubrick, Haynes and cinematographer Alex Nepomniaschy use slow, methodical tracks and zooms, while Moore is often shot at a distance, as if getting too close would pass on the illness she is struggling to understand. 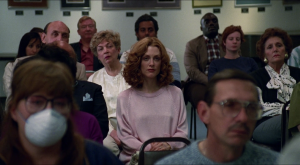 There’s an industrial hum underlying the first half of the film that’s reminiscent of Lynch and bores into the brain like a form of tinnitus. The Lynch nods can also be found in the Angelo Badalamenti-esque score by Brendan Dolan and Ed Tomney.

Aftershocks from the earthquake that struck the San Fernando Valley in 1994 were apparently occurring during filming and that rumbling sense of foreboding seeps out of every frame, right until its ambiguous ending that finds Carol trying to hold on to a life that has been blighted by forces she doesn’t understand. 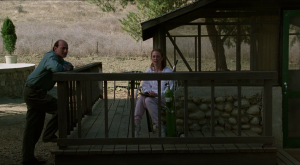 Delivering one her on her very finest performances, Moore makes flesh and blood a part that in lesser hands could have been irritating and one-note. Carol is an empty vessel in many ways, a doll who at one point even resembles a shop floor mannequin at a birthday party she attends with other rich housewives. However, she is also a human being going through a terrifying ordeal and Moore garners our sympathy through a heartbreaking turn that’s imbued with loneliness and fear.

Even more of a cautionary tale now as on its release more than 20 years ago, Safe is a modern horror that doesn’t need the traditional tropes to scare us – modern life will do that job just fine.