This is my latest contribution to The Big Picture, the visually focused film magazine that proves there’s more to film than meets the eye. The Big Picture is running a series of features and reviews throughout April with the theme of ‘faith’. This piece is part of the site’s Thousand Words section and examines why many of the most thoughtful films about religion come from atheist directors.

Ever since its earliest days, cinema has, to quote the esteemed French critic André Bazin, “always been interested in God”.

Whether it be biblical tales of all scales and budgets, stories about saints and sinners, or more grounded accounts of everyday church professionals, filmmakers have consistently returned to the well of religion to draw inspiration.

Many of the most thoughtful and challenging cinematic examinations of religion come from directors who are declared atheists or agnostics; a fascinating paradox that begs the question – just what is it that drives such filmmakers to explore religious themes?

The most recent, and certainly lavish, example is Exodus: Gods And Kings (2014); Sir Ridley Scott’s epic retelling of the Moses story.

Scott, an atheist who once declared that “the biggest source of evil is, of course, religion”, has dipped his toe into such waters before with Kingdom Of Heaven (2005), his controversial 12th-century Crusades drama, released at the height of George W. Bush’s War on Terror, which asked why Christians and Muslims can’t just get along.

Scott has spoken of choosing to strip superstition and supernaturalism out to find his way into the story and this is reflected in the logical way the plagues are explained by Ewen Bremner’s Expert, while Moses’ vision of God comes from a knock to the head. Scott’s most interesting decision is to depict God as a petulant young boy, who is accused by Moses of acting out of revenge, not love.

Exodus: Gods And Kings proved a hard sell to the same Christian groups who didn’t take kindly to Darren Aronofsky’s Noah (2014), whose eponymous central figure the atheist director has described as “the first environmentalist”. Aronofsky’s singular vision (he called it the “least-biblical biblical film ever made”) of a zealot driven to the brink of madness by his mission from “the creator” and the presence of giant angels made out of rock proved too subversive for some.

The CGI effects and huge budgets of such tentpole blockbusters are in stark contrast to the work of Ingmar Bergman, whose austere ascetic belies the emotional explosiveness of his dramas. 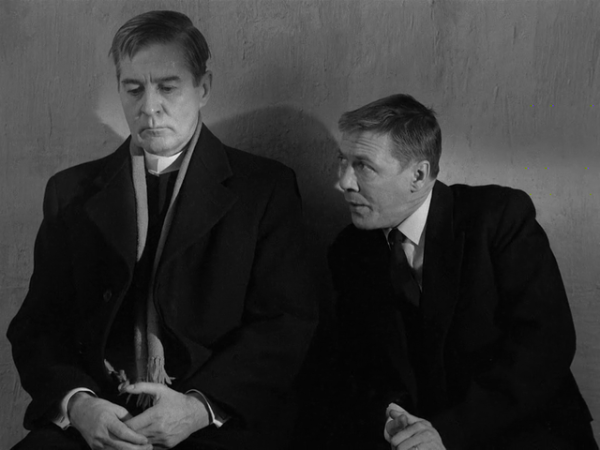 Reconciling his “tormented and joyless relationship with God” in his autobiography The Magic Lantern, Bergman concludes: “When you die, you are extinguished. From being you will be transformed to non-being.”

Having previously addressed God’s silence in the likes of The Seventh Seal (1957) (“Why can’t I kill God within me?” asks the medieval knight, to which Death replies: “Perhaps no-one is there.”), Bergman returned to this theme as the crux of a trilogy of powerful and devastating masterpieces: Through a Glass Darkly (1961), Winter Light (1962) and The Silence (1963).

The trilogy can be distilled to a key scene in Winter Light involving a depressed Pastor (Gunnar Björnstrand), who goes through the motions for his diminishing congregation in spite of his own faith having evaporated since his wife’s death, and the Sexton (Algot Frövik).

Rather than the physical pain Jesus endured in his final hours (“It couldn’t have been all that bad”), the Sexton suggests Christ’s real torment was emotional, having been abandoned by his disciples and seized by doubt in his last moments on the cross. “Surely that must have been his greatest hardship? God’s silence,” suggests the Sexton, to which the Pastor can only meekly respond: “Yes…” 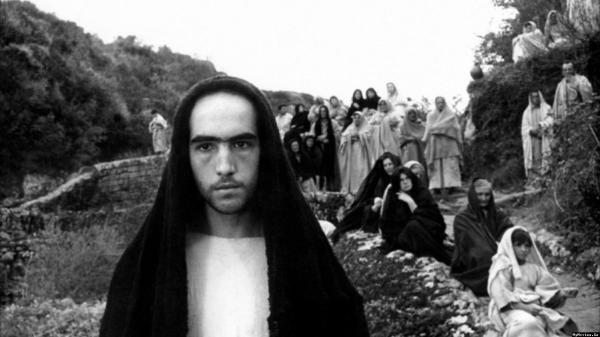 The life of Christ has been portrayed countless times on film, but none have done so with the poetic power of Pier Paolo Pasolini’s The Gospel According To St Matthew (1964).

Pasolini is a fascinating figure; a homosexual and atheist who embarked on the film after reading the New Testament in a hotel room and explained his philosophy in a press conference thus: “I may be an unbeliever, but I am an unbeliever who has a nostalgia for a belief.”

Unlike most other depictions of Christ’s life, The Gospel According To St Matthew‘s neorealist approach is striking for just how raw and unvarnished it is. Imbued with Pasolini’s Marxist leanings, Jesus is portrayed as a revolutionary leader who expects and demands the word of God be listened to and obeyed. Arguably the most wholly realised biblical movie ever made, it speaks volumes about The Gospel According To St Matthew that it sits within the Vatican’s list of 45 great movies.

Another atheist filmmaker who appears on that list is Luis Buñuel (for his 1959 film Nazarin); which is amusing as many of his films openly mock the Roman Catholic Church.

Buñuel is well-known for his merciless satirical style, but few institutions get it in the neck as sharply as organised religion, whether it be subverting the image of Christ in L’Age d’Or (1930), or playfully portraying Satan as a busty blonde trying to tempt the saintly title character off the pillar he has sat atop for six years, six weeks and six days in Simon Of The Desert (1965).

Buñuel remained an uncompromising figure, as the following passage from his autobiography My Last Sigh attests: “If someone were to prove to me – right this minute – that God, in all his luminousness, exists, it wouldn’t change a single aspect of my behaviour.”

Equally uncompromising was Robert Bresson, who revisited the themes of redemption, salvation and grace throughout his celebrated career and became regarded as the “patron saint” of cinema; ironic considering the director once cryptically described himself as a “Christian atheist”.

Set in a convent, the metaphysical thriller Angels Of Sin (1943) is a daring and assured first feature that immediately established the director’s unique style. The beauty of grace is central to the spiritual odyssey that is Diary Of A Country Priest (1951), while The Trial Of Joan Of Arc (1962) is unsparing in the suffering handed out to the Christ-like Maid of Orléans.

However, it’s Au Hasard Balthazar (1966) that remains arguably his most divine film, a work described by Jean-Luc Godard as “the world in an hour-and-a-half”. Like Joan, the saintly donkey Balthazar endures cruelties and humiliations with a nobility that rises above the sadistic instincts of his human masters – with the exception of the vulnerable Marie (Anne Wiazemsky), who also withstands the torment of others.

Cinema is storytelling and religion is rife with stories; so should it be any wonder that the most transcendent filmmakers explore such themes, be they believers or not?