Throughout the course of our movie-watching lives most of us probably stumble across at least one film that strikes a particular chord with us but fails to get the attention it deserves.

I have plenty and will be passing comment on them in good time, but the first film I want to champion is the little-known 2004 gem Keane.

Back in 1994, Lodge Kerrigan’s directorial debut Clean, Shaven garnered critical plaudits across the board. A masterful treatise on one man’s battle with schizophrenia, it marked Kerrigan out as a genuine talent.

He returned to the subject of mental illness 10 years later with Keane. The film earned as much praise as Clean, Shaven had a decade earlier and, following a successful festival run culminating in a screening at the 2005 Cannes Film Festival, it gained a theatrical release. Some movies manage to break out of the festival circuit and make a genuine mark on the world stage; however, Keane was not one of them and soon enough quietly slipped through the cracks, taking Kerrigan’s directorial career with it.

But Keane deserves the dust to be blown off of it and reassessed as a defining film of 21st Century independent cinema.

The film begins with a man showing a picture of a young girl to staff and commuters in New York’s Port Authority Bus Terminal and asking if they recognise her. The man is William Keane (Damian Lewis) and the girl is his daughter Sophia, who was abducted several months earlier from there.

Clearly desperate and extremely troubled, William wanders the streets muttering to himself and calling out for his daughter. Following a night spent sleeping rough, he returns to the hotel he has been staying at and is told he is behind on the rent. After paying up by cashing a disability cheque, he begins his daily routine once more, wandering around the Port Authority convinced the person who abducted his daughter is there.

When not looking for Sophia, William downs vodka and hoovers up lines of coke – which only seems to fuel his rampant paranoia. Back at the hotel he meets Lynn (Amy Ryan) and her young daughter Kira (Abigail Breslan) and helps out by offering them money. A bond of sorts is formed, and Lynn asks William to look after Kira for a few hours. He agrees, but when they return to the hotel and are told that Lynn won’t be back till the following day, William reassures Kira she is not being abandoned. 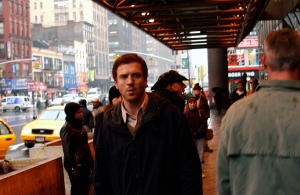 The two spend the day together and, for a little while at least, it seems William’s life has meaning once again. But after Lynn returns and announces they are leaving, he takes Kira from school without Lynn’s permission and they go to the Port Authority, allegedly to meet her mother.

Inside the terminal, William sends Kira off to buy sweets and watches intently from a distance, seemingly convinced the man who abducted Sophia will try to do the same with Kira so he can catch him. However, when this inevitably fails to happen, William weeps for the loss of his daughter, perhaps finally realising that he is never going to see her again.

Born out of Kerrigan’s fear (and any parent’s one would imagine) of his own child’s disappearance, Keane may not be the feel-good-hit-of-the-summer, but as a piece of cinema it is thought-provoking, tragic and unremittingly haunting.

We’ve no doubt all encountered a character like William Keane before, and most likely given them as wide a berth as possible. However, there’s no escape here as from the first shot the handheld camera fixates on Keane’s face and barely leaves his side, lending the film a deep sense of  claustrophobia. Indeed, by the final credits you’ll be forgiven for feeling like you’ve just emerged blinking into the sunlight from a particularly long tunnel.

William (Damian Lewis) tries to hold it together in Keane

Spending an entire film with a character who is so mentally scarred is a tough ask, so it is to the credit of Lewis’ powerhouse performance that it never once feels like a chore. His breakthrough role after having starred in HBO’s mini-series Band of Brothers, Lewis (currently starring in TV show Homeland) totally inhabits the title role and never once delivers a false note.

Lewis somehow manages to make William neither too sympathetic, nor too off-puttingly crazy, instead delivering a performance of subtle nuances that suck you in.

Critics have questioned whether William’s daughter even exists, rather she is the delusion of a disturbed mind. However, this is to miss the point of the film – to William she is as real as any of us and as such we must ride along this dark, lonely road with him.

In all likelihood, Keane will never be considered a classic – it’s subject matter is too difficult and unconventional for that – but seek it out if you can. Cinema doesn’t come much better than this.