This is my latest contribution to The Big Picture, the internationally recognised magazine and website that shows film in a wider context. This piece about John Frankenheimer’s 1966 paranoid classic Seconds was written as part of The Big Picture’s Lost Classics strand, although I am including it within my list of Great Films You Need To See.

Paranoia is a commodity rich with cinematic potential, but few pictures have mined it with such bleak and powerful unease as Seconds (1966).

A work of cinema so far ahead of its time, Seconds is as topical now as ever has been

Ostensibly a work of science fiction, John Frankenheimer’s chilling dystopian nightmare addresses themes that, if anything, are more timely now than they were in the so-called Swinging Sixties.

Our fear of aging and irrelevance are front and centre in this adaptation of David Ely’s novel, as are themes of lost identity, unwitting conformity and a belief in the promise of self-entitlement sold by politicians and advertising firms.

Just one of the surreal images from John Frankenheimer’s Seconds

Seconds marked the final pessimistic entry in Frankenheimer’s unofficial ‘paranoia trilogy’ (after The Manchurian Candidate (1962) and Seven Days In May (1964), but rather than reflect the growing political cynicism that was gripping a country still coming to terms with Kennedy’s assassination and the spiralling war in Vietnam, it instead highlighted the growing crisis of masculinity that was unfolding in lock step with the burgeoning feminist movement.

The man in question is Arthur Hamilton (John Randolph), a banker bored with his marriage, job and suburban existence who signs up (after some coercion) to the promise of a new life by a shadowy organisation referred to only as ‘the Company’. Following a faked death and extensive plastic surgery, Hamilton is ‘reborn’ as Antiochus Wilson (Rock Hudson), a successful artist living the American Dream. For all intents and purposes, Wilson can begin again; however, the one thing he can never change is himself. 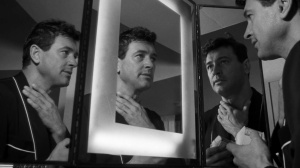 Seconds grabs your attention from the moment Saul Bass’ surreal and unnerving title sequence kicks in with a series of distorted close-ups of a person’s face, accompanied by Jerry Goldsmith’s highly strung organ score.

The seeds of alarm sown by Bass bloom in the hands of James Wong Howe’s deliberately disquieting cinematography (the film’s sole Oscar nomination), which uses all manner of weird camera angles, extreme close-ups and tight tracking shots to keep the viewer on edge. 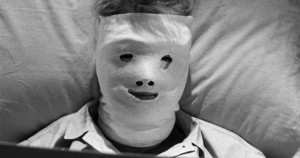 Meat is a notable theme, the meaning of which becomes clear as the film nears its climax. Hamilton is led through a slaughterhouse filled with carcases to attend  his rendezvous with the mysterious organisation, while in the film’s most blackly comic scene, chirpy Company salesman Mr Ruby (Jeff Greer) tucks into a crispy chicken dinner while explaining matter-of-factly the circumstances of Arther’s ‘death’.

Company employee Davalo (The Manchurian Candidate‘s Khigh Dhiegh) explains to Wilson: “You don’t have to prove anything anymore. You are accepted. You are alone in the world, absolved of any responsibility, except to your own interests.” The blank canvas we later see him staring at  in frustration in his beachside home suggests the interests he thought he had are just as fake as he is, however.

The point is underlined when he encounters the enigmatic Nora (Salome Jones), who describes Wilson as a “key still unturned” and urges him to throw off the shackles and embrace life. Wilson toys with the idea, but the straightjacket he’s sought to free himself from is tighter than he first thought.

Most commonly thought of as a leading man in frothy comedies, Hudson gives arguably his best performance as the tortured Wilson. It’s a canny bit of casting; Hudson was one of the world’s most desirable men at the time and the actor does an admirable job of undermining his pretty boy image, most notably in the shocking final scene.

The film’s influence can be seen in the likes of Total Recall (1990/2012) (based on Philip K Dick’s We Can Remember It For You Wholesale, also released in 1966), Terry Gilliam’s Brazil (1984) and David Fincher’s The Game (1997), while its theme of masculine crisis is the driving force behind a string of serious television shows, from The Sopranos to Mad Men.

A work of cinema so far ahead of its time, Seconds is as topical now as ever has been.

This review forms part of the IMDB Top 250 Films project on the fantastic Head in a Vice‘s fantastic site. Try to make a beeline to his informative, entertaining site.

For a film so of its time, it’s remarkable how relevant John Frankenheimer’s 1962 Cold War classic The Manchurian Candidate has remained.

John Frankenheimer’s The Manchurian Candidate – “one of the most chilling, paranoiac, satirical and downright surreal polemics against the politics of fear ever made”

Ostensibly a white knuckle thriller about a decorated soldier being brainwashed by a cabal of Communist conspirators into becoming an unwitting assassin, this adaptation of Richard Condon’s novel remains one of the most chilling, paranoiac, satirical and downright surreal polemics against the politics of fear ever made.

One of the first films to explore the notion of using mind control to create so-called sleeper agents, its continued resonance is such that ‘Manchurian Candidate’ is a term still used by panic-peddlers to describe public figures who they claim are the mouthpiece of evildoers.

The unfortunate platoon, unwitting pawns in a much larger game, in The Manchurian Candidate

The book’s central premise of a fantastical Communist plot to overthrow America from the inside is mere window dressing for Condon’s real target, made manifest in the character of John Iselin (played in the film by James Gregory), an ignorant, but dangerous buffoon controlled by his domineering, ideologically driven wife (Angela Lansbury).

The Communist plot takes shape when a platoon of US soldiers serving in the Korean War is captured and brainwashed. The platoon returns to America, where cold, unloveable Staff Sergeant Raymond Shaw (Laurence Harvey) is credited with saving the lives of his men and recommended for the Medal of Honour by Captain Marco (Frank Sinatra). Marco suffers a recurring nightmare in which Shaw brutally kills two of his own men and becomes convinced they were conditioned and that Shaw is being primed for something terrible. Little does Marco realise, however, who Shaw’s American operator is and quite how ambitious the plot is.

America was still in the icy grip of the Cold War when Frankenheimer’s film was released. Indeed, it landed in cinemas slap bang in the middle of the Cuban Missile Crisis when the Soviet Union and United States appeared destined for nuclear conflict and initially suffered at the box office as a result.

It’s appropriate for a film about a massive multi-national cabal to be the subject of its own conspiracy theories. Sinatra purchased the rights following the assassination in 1963 of President Kennedy (who was a fan of the book) and kept it from circulation until 1988, supposedly out of a sense of remorse for the loss of his friend. However, according to Frankenheimer the film’s withdrawal was actually the result of a fall-out over money between Sinatra and distributors United Artists.

The film’s quasi-documentary style lends the film an urgency and its recognition that television could be used to shape opinion and spread disinformation was well ahead of its time. The scene when Iselin gatecrashes a press conference waving a list of “card-carrying Communists” working within the government is expertly staged by Frankenheimer, who shows Iselin tub-thumping on TV screens in the foreground and an uproarious media behind.

The Manchurian Candidate‘s most powerful moments bookend the film. The celebrated brainwashing sequence near the start is a bizarre, deeply unsettling tour-de-force by Frankenheimer and still shocks. The virtuoso 360° tracking shot starts with the soldiers sat laconically on stage at a talk given to the Ladies Garden Club concerning ‘Fun with Hydrangeas’. As the camera gradually comes full circle the terrifying reality dawns on the viewer – we’ve actually been witnessing events through the platoon’s delusional perspective; the person giving the talk is smug Communist doctor Yen Lo (Khigh Dhiegh), the ‘ladies’ are a coalition of Soviet, Chinese and Korean officials and rather than being a quaint affair this is a deadly demonstration of mind control.

Likewise, the political convention climax in Madison Square Garden is nail-biting stuff, shamelessly lifted from Hitchcock’s The Man Who Knew Too Much.

One of the odder aspects of the film is George Alexrod’s script, dense and verbose at times (especially during the brainwashing sequence) and just plain surreal at others, most notably when a shaky Marco meets Rosie (Janet Leigh) on the train. After Marco corrects her on which state they’re in she replies: “I know. I was one of the original Chinese workmen who laid the track on this stretch.”

It’s a nonsensical exchange that some believe is code by Rosie to control Marco. Things get stranger still when, at their next encounter she announces she’s suddenly broken off her engagement with her fiancé and wants to get together with Marco. 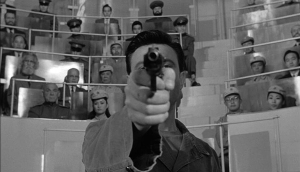 Raymond Shaw (Laurence Harvey) – “the kindest, bravest, warmest, most wonderful human being I’ve ever known in my life” – in The Manchurian Candidate

Sinatra could pull it out of the bag when he needed and he’s never been better as the edgy soldier frustrated he can’t do more to help his sergeant. Harvey is perfectly cast as the doomed, tragic Shaw, a puppet on a string helplessly controlled by both his conditioning and his despicable mother, played by Lansbury.

One of the great movie villains, Lansbury (who was only three years older than Harvey) plays Mrs Iselin as the ultimate spin doctor, an ultra-domineering sociopath who serves an ideology but isn’t afraid to stamp on her comrades when things get personal.

Frankenheimer litters the film with numerous other subtle moments (Iselin’s reflection in a portrait of Abraham Lincoln to symbolise just how low politics has sunk) and his use of deep focus lends the film a clammy claustrophobia.

That the film is more relevant today than its unsatisfactory 2004 remake speaks volumes about its importance not only as a work of cinema but also as a beacon of vigilance against fear being used as the weapon of choice by our public servants.