I’m proud to say that I’ve become an offical contributor to The Big Picture, the internationally-recognised magazine and website that offers an intelligent take on cinema, focussing on how film affects our lives. Aimed at the enthusiastic film-goer at large, The Big Picture provides an original take on the cinematic experience. This piece is part of the Four Frames section, wherein the importance of four significant shots are discussed, in this case from George A. Romero’s horror classic Night Of The Living Dead.

It’s perhaps fitting that in the year that saw the world descend into civil unrest, a micro-budget splatter movie in which the dead rise from the grave and usher in the apocalypse would redefine both the horror genre and contemporary cinema. 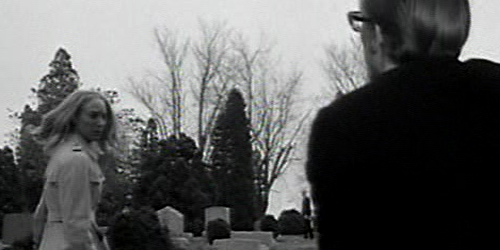 There’s horror before 1968’s epochal Night of the Living Dead and there’s what came after, such is the seismic impact that George A. Romero’s debut feature continues to have.

Chucking out the rulebook in true anti-establishment style, he found a unique and unorthodox way to envisage the tipping point society seemed to be inevitably careering towards at the time.

Romero monkeys about with the audience’s expectations from the film’s opening moment when siblings Barbra (Judith O’Dea) and Johnny (Russell Steiner) visit their father’s grave. Our assumed hero Johnny latches onto his sister’s unease and, putting on his best Boris Karloff pokes fun saying: “They’re coming to get you Barbra!”

He continues to freak out an angry Barbra and observes a shambling figure seen earlier in long-shot drawing ever nearer. “Look! There’s one of them now!”

The unintended irony of this statement arrives with a jolt when the man (Bill Hinzman, who in basing his shuffling gait on Karloff in The Walking Dead proves that the old ways are sometimes the best) attacks Barbra. We presume Johnny will come to the rescue, but in fighting the ghoul (the word “zombie” is never uttered in the film) he falls and smacks his noggin on a headstone. Not so much the hero after all.

With our assumptions in tatters, all bets are off as Barbra flees to a farmhouse and is joined by Ben (Duane Jones), who doesn’t convince anyone, least of all himself when he shuts the growing horde of undead out (or imprisons them both, more to the point) and says “it’s alright”.

Not for nothing has Steiner’s Karloff impression become a defining moment in horror cinema. Romero, deciding that no-one else was going to do it passed the baton to himself by choosing to subvert an old icon, as if to say: “That’s then, this is now and you ain’t seen nothin’ yet.”

Tellingly, it’s the one amusing moment in a film that, like its implacable army of the undead, relentlessly progresses towards a soul-shattering conclusion.

There’s something wonderfully outrageous about fruit and vegetables being used by serious, technically-gifted individuals to represent the sound of a body slamming onto the ground or a neck being broken.

It’s a side of filmmaking normally hidden from the audience, a process that takes place long after the cameras have stopped rolling and the actors have moved on to other projects. 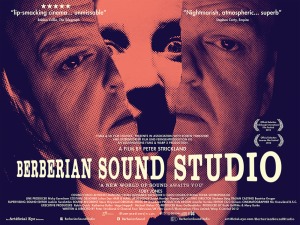 In director Peter Strickland’s astonishing Berberian Sound Studio, this is turned completely on its head, wherein the mechanics of sound reproduction (known as foley) take precedence. Moreover, Strickland sets the film in the 1970s, when warm and fuzzy analogue equipment like tape recorders and magnetic tape was used, in contrast to the clinical digital apparatus employed today.

Strickland used a modest inheritance and relocated to Transylvania to shoot Katalin Varga, a striking, outré revenge drama that marked him out as one to watch. The writer/director has taken a massive leap forward with his sophomore feature, a head-spinning psychological horror-thriller that plunges buttoned up sound engineer Gilderoy (Toby Jones) into a frenzied whirlpool of his own making.

Gilderoy has flown from Britain to Italy to work on The Equestrian Vortex, what he assumes is the sort of nature documentary he has made his stock in trade from his garden shed in Dorking.

Unbeknownst to him, The Equestrian Vortex is in actuality a sadistic, stomach-churning giallo horror film, the sort of supernaturally-charged splatter-fests made famous by such maestros of the genre as Dario Argento and Mario Bava.

As the images of torture, rape and mutilation are projected to Gilderoy for the first time, we see his facial reaction contort between voyeuristic intrigue and disgust. All the audience sees of the film are its opening credits, with its blood-red palette and shots of terrified women.

Sitting alongside the film’s irritable, unforgiving producer Francesco (Cosimo Fusco) in the claustrophobic sound studio, he goes to work recording marrows being hacked to pieces, cabbages being stabbed and radishes having their tops violently ripped off (all of which are left to rot in a none-too subtle moment of symbolism). He also records the bone-chilling screams of several women, in particular the paranoid Elena (Tonia Sotiropoulou), who is angry for allowing herself to be exploited by the film’s suave, oily director Santini (Antonio Mancino) and warns Gilderoy against making the same mistake.

A homesick stranger in a strange land, he gradually finds himself being dragged deeper into the cesspool of moral filth and degradation that is playing out on screen and clings onto letters from his mother describing the untainted day-to-day mundanities his increasingly fractured psyche is losing a grip of.

Gilderoy allows his work to overwhelm him, in much the same way as Gene Hackman’s suveilance expert Harry Caul in The Conversation, and before long he’s no longer able to differentiate between reality and his nightmarish paranoia where each disturbing sound is amplified and the silence is almost as deafening. 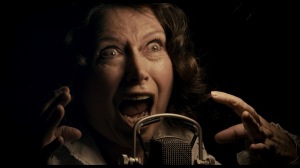 Psychological horror at its very best in Berberian Sound Studio

Strickland fearlessly takes his protaganist  into a vortex of his own making and nods to David Lynch and Ingmar Bergman’s Persona in the way he portrays Gilderoy’s mental breakdown on screen. It’s deeply unsettling stuff, rivetingly played by Jones in a career-best turn. Jones has one of those faces that can exude gentility and cruelty at the same time (if ever a remake of 10 Rillington Place was made, he would be perfect as unassuming serial killer John Christie) and we’re left to make our own mind up as to whether Gilderoy’s experiences have corrupted him or merely held a mirror to the darkness he (and we) fear has always been there.

The process of producing the sounds are as lovingly shot as the equipment on which they are recorded (Strickland holds the camera on tape spools or the analogue sound desk). In spite of the film’s suffocating grip, there are many moments of black humour and scenes of real beauty, in particular when Gilderoy shows his colleagues how he can create the sound of a UFO by scraping a light bulb against a wire brush.

For a film where sound is everything, foley artist Heikki Kossi must get special mention, while ethereal electro band Broadcast provide a suitably haunting score.

Utterly unique, Berberian Sound Studio is a masterclass in sustained dread and the first of what could well be a slew of masterpieces from this vital, gifted filmmaker.

It might be about as subtle as a boot in the Jacobs, but Cockneys vs Zombies is far more than its attention-grabbing title and probably the most entertaining British zombie film since Shaun of the Dead.

Brothers Andy (Harry Treadaway) and Terry (Rasmus Hardiker) and their ragtag gang are half way through robbing a bank to save their granddad Ray’s retirement home when a zombie apocalypse strikes London’s East End. Meanwhile, Ray (Alan Ford in full-on “Laaandan” mode) and his friends (including stalwarts Honor Blackman and Richard Briers) fight to keep the walking dead out of the home.

More often than not, films like this can be all title and no substance. While Cockneys vs Zombies can hardly be considered genre-defining it knows its strengths and plays to them. Writer James Moran isn’t afraid to have a laugh at the expense of East End clichés and stereotypes, be they Dudley Sutton’s ridiculously convoluted cockney rhyming slang, football hooligans (despite them being dead) or Lock, Stock… gangsterisms. Hell, even ex-EastEnders actress Michelle Ryan gets a major part.

Hamish (Richard Briers) outwalks the undead in Cockneys vs Zombies

Moran and director Matthias Hoene subtly subvert the perception of the elderly in our society as being more than people waiting to die, while also giving us one of the most amusing scenes of the year when a zimmer-framed Briers tries to outrun a zombie.

You’d have to be dead not to find this ‘zomedy’ funny.