If Blue Ruin served as his calling card, then this visceral, anarchic work of slaughterhouse filmmaking firmly marks Jeremy Saulnier as one of genre cinema’s most formidable young talents. 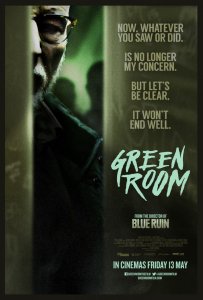 If John Carpenter’s ultimate legacy is to help sire a new generation of genre filmmakers with as much talent and guts as Jeremy Saulnier, then he’s given us a rich gift indeed

The signature of maestro John Carpenter has been etched over a plethora of glorified B-pictures over the last few years and the influence of the bearded one is all over Green Room.

Cinema is nothing if not cyclical, so it makes sense that Carpenter – a child of the 1950s – was drawn to classics of the period like The Thing From Outer Space (1951) for The Thing (1982) and much of Hitchcock’s oeuvre for his various horror classics. Fast forward to today and the work of Carpenter has clearly formed a lasting impression on Saulnier and other directors whose formative film education included the likes of Halloween (1978) and Escape From New York (1981). 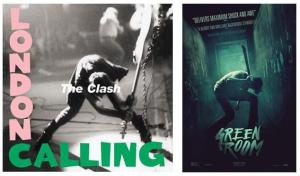 In the case of Green Room, Saulnier has readily acknowledged the debt he owes to Carpenter’s Assault On Precinct 13 (1976); itself a remake of the John Wayne western Rio Bravo (1959). However, to pass this off as a knock-off would do a grave disservice to what is a work of real substance – one that claws under the skin and in the psyche. Besides, Saulnier has also cited First Blood, Peckinpah’s Straw Dogs and nihilistic 80s classic River’s Edge as influences, while the poster pays more than a passing nod to The Clash’s London Calling cover.

The plot bubbles around the horrific ordeal suffered by the members of The Ain’t Rights, a down-at-heels punk band of young misfits that accepts a paycheck to play to a bunch of neo-Nazi skinheads in a fleapit venue stuck out in the middle of nowhere. When one of them witnesses something they shouldn’t they are forced to hole themselves up in the titular green room while the menacingly calm Darcy (Patrick Stewart) is content to solve the problem by any means necessary. 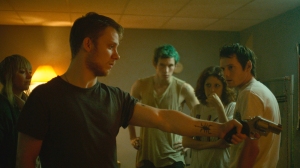 Something Ain’t Right: The band get the gig booking from hell in Green Room

As he showed in Blue Ruin, Saulnier is one for subverting our expectations and Green Room plays out in unexpected ways. Moments of hope are often violently snatched away, while each of Darcy’s followers are fully fleshed out characters and given more to do than simply look demented.

Kai Lennox’s Clark is undoubtedly a sociopath, but the bond he shares with his attack dogs is genuine and heartfelt, while also being exploitative. The use of dogs is often violently nauseating, which makes the final moments of the film so clever as our awful assumptions involving a pit bull which has found itself untethered are turned on their head. 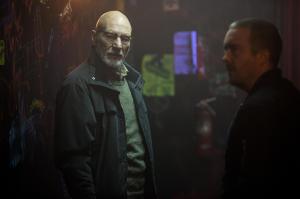 Likewise, Macon Blair’s Gabe is at first portrayed as an unswervingly loyal lieutenant to Darcy, but as the events in the club unfold his doubts grow as quickly as his resentment. Whilst no doubt someone with authority among the rabble who frequent Darcy’s establishment, it’s clear he feels frustrated at not having the status he feels is owing to him and this culminates in fascinating ways.

Green Room has garnered plenty of column inches for its breathless tension and hardcore shocks, but it’s surprising just how little gore there is in the film. While it’s most notorious scene involving Anton Yelchin’s Pat making the mistake of leaning his arm outside the green room door is queasy viewing, the aftermath is only momentarily glimpsed and Saulnier leaves it to the viewer to use their adrenalin-fuelled imagination to fill in the blanks. 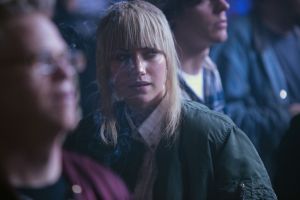 That incident aside, the band members – joined in the green room by Imogen Poots’ club regular Amber – are notable for largely making smart decisions under what are assuredly stressful circumstances. Such is the bleakness of their plight you genuinely question whether any of them will make it out alive and Saulnier once again subverts things by maiming and killing off cast members in a wholly unexpected order.

Despite once again playing a softly spoken leader a la Professor X and Captain Picard, it’s fair to say Stewart is playing against type as Darcy and is clearly having a ball. He imbues the character with effortless authority and a cold pragmatism that largely keeps him one step ahead of everyone else. That said, you get the sense that Darcy would much prefer to be anywhere else apart from where he is – something he lets slip late on when, in response to Pat’s exhausted, bewildered utterance “This is a nightmare”, he quietly responds “For us all…”.

If John Carpenter’s ultimate legacy is to help sire a new generation of genre filmmakers with as much talent and guts as Jeremy Saulnier, then he’s given us a rich gift indeed.