For a writer and director who’s the unashamed king of the movie homage there really isn’t anyone else out there making films quite like Quentin Tarantino. 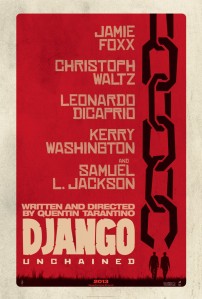 Quentin Tarantino’s Django Unchained – arguably his most outrageous film yet

Django Unchained, Tarantino’s eighth feature is arguably his most outrageous yet and serves up a similar stylistic mash-up as his previous film Inglourious Basterds.

In that movie, he somehow got away with making a World War Two spaghetti western (complete with Ennio Morricone music) where a squadron of Jewish-American soldiers give the Nazis a taste of their own medicine.

Here, Tarantino uses a similar mould for his most fully realised and satisfying film since Jackie Brown, jettisoning the episodic structure that has been so familiar throughout his filmography.

Django Unchained is a western with extra spaghetti sauce and features a blaxploitation hero even cooler than Shaft. From the title, which directly references the 1966 spaghetti western Django starring Franco Nero (who makes a cameo here), to the red-painted opening credits, music, ultra violence and theme of revenge (common to virtually all of Tarantino’s work), the film sends the homage-o-meter up to 11. 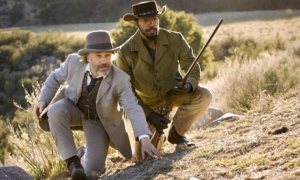 It’s also the writer-director’s most overtly political work to date, addressing the still thorny subject of slavery in a frank and often brutal way. Our hero is Django (Jamie Foxx), a slave in 1858 Texas who wins his freedom thanks to the intervention of Christoph Waltz’s German dentist-turned bounty hunter Dr King Schultz (it can’t be a coincidence that a character who abhors slavery shares his name with Dr Martin Luther King).

Schultz takes Django under his wing and trains him in the art of bounty hunting (“like slavery, it’s a flesh for cash business”) and, in return for assisting him, Schultz agrees to help Django win the freedom of his wife, Broomhilda (Kerry Washington), a slave forced to work at the perversely named Candyland, owned by the despicable sadist and racial supremacist Calvin Candie (Leonardo DiCaprio, sporting horribly blackened teeth).

Tarantino has never been one to shy away from throwing in the kitchen sink when it comes to on-screen violence. It’s a facet of his work that has attracted considerable consternation from critics and commentators throughout his career, but while he no doubt takes great pleasure in seeing how far he can go he also never lets you forget that violence and bullets hurt – a lot. When we see slaves being killed in the most vicious of ways at the hands of Candie, we’re left in no uncertain terms that this is no laughing matter.

That being said, just as the Nazis have it coming in Inglourious Basterds, there’s a certain gleeful satisfaction in seeing a black man administer justice of the most merciless kind to the racist white trash who have profited from and exploited the slave trade.

In the film’s most amusing scene , a group of proto-Ku Klux Klansmen led by Big Daddy (Don Johnson) go in search of Schultz and Django, only to bicker among themselves because they can’t see properly out of their white hoods. It’s a nicely observed comment on the absurdity and cowardice of racism.

Tarantino also nods to classic John Ford westerns, framing his heroes against a series of expansive vistas, beautifully filmed by cinematographer Robert Richardson, and conjures up a number of arresting images, most strikingly when blood splattters over pure white cotton on a plantation. 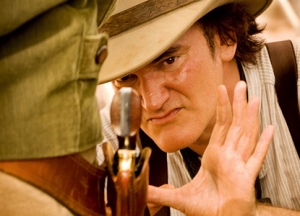 As verbose as Tarantino’s scripts are, his rich dialogue is a gift for the superlative cast he’s assembled here. Waltz almost steals the show as the kind-but-deadly Schultz, as memorable a screen presence as his diabolical Hans Landa from Inglourious Basterds.

Foxx does a nice line in man-with-no-name quiet intensity (can you imagine what Will Smith, Tarantino’s original choice, would have done with the role?), while DiCaprio has a whale of a time tearing it up as the dapper southern aristocrat out of control in his own private fiefdom.

However, all pale in comparison to the quite brilliant Samuel L Jackson as Stephen, Candie’s house slave who’s so servile he makes Uncle Tom look like a Black Panther. Hidden behind that frail, shuffling walk lies a truly abominable human being who, when he isn’t perched on Candie’s shoulder like a parrot repeating his every line, is punishing his fellow slaves and conspiring against them to get in his white master’s good books. It’s a very disturbing performance that only Tarantino and Jackson could have dreamt up.

What Tarantino still has some trouble with, however, is acting and he’s truly terrible as an Australian (!) slave driver. He can’t even resist affording himself the film’s most colourful death. This entire section is the only weak spot in the whole movie. There’s a natural end point before this, but Tarantino (who has previously admitted to not showing enough discipline when it comes to a script) gives himself another half an hour before he finally wraps things up, all be it in a pleasingly brutal way.

The thing you have to admire about Tarantino is that he’s a rock’n’roll director in the truest sense, a film geek who wants to share his love of cinema’s outer margins and with Django Unchained he hits it out of the park.