One of the greatest comedy creations to come out of East Anglia becomes an accidental hero of typically Partridgidian proportions in this long-awaited big screen outing for Norwich’s premier mid-morning ‘D-Jock’. 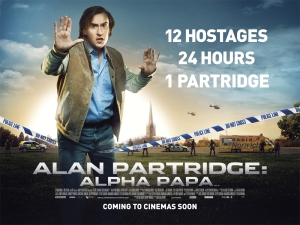 Like Corn Flakes or bakes beans, Steve Coogan’s most beloved comic persona has remained an enduring constant in a world of change since he first popped up on Radio 4’s On The Hour more than 20 years ago. 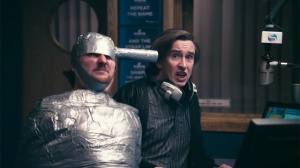 Alan (Steve Coogan) and Sidekick Simon (Tim Key) are forced to stay on air (well, not so much ‘forced’ in Alan’s case) in Alan Partridge: Alpha Papa

His egomaniacal ambition may still be intact, but the cold, hard reality for ruddy Alan Partridge is that his fall from grace has been pretty epic since his heyday as a BBC talk show host. And yet, just as Alan seems to be scraping the bottom of the broadcasting barrel as one half of the Mid Morning Matters show on North Norfolk Digital, he’s unwittingly offered a chance of career redemption thanks to disgruntled former colleague Pat Farrell (Colm Meaney). 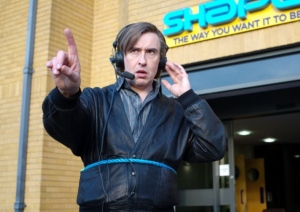 North Norfolk Digital’s faceless new owners have renamed the station Shape and sacked Pat, who goes off the deep end and holds the station’s staff hostage. The only person he’ll talk to is Alan, whose initial reticence and terror gives way to shameless opportunism when he’s branded the face of the siege by the national media.

Wisely deciding against the lazy old chestnut of relocating a TV show abroad in an attempt to generate some fish-out-of-water chortles, Coogan and co instead remove Alan from his comfort zone while still basing the action in his native Norwich.

Having played him on and off for more than two decades, Coogan slips comfortably into the leather jacket of Alan, a petty, pathetic, lonely and selfish excuse for a human being who you can’t help warming to in spite of yourself. 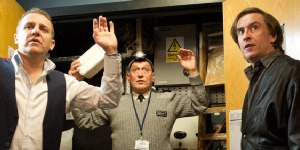 The opening credits sequence in which Alan fervently mimes along to Roachford’s Cuddly Toy while sat behind the wheel (and not forgetting to point out to another driver that her fog lamps are mistakenly on) is an inspired moment of physical comedy that perfectly encapsulates Partridge. Likewise, a later scene sees him furiously flicking through dozens of TV channels to find any mention of himself in a pitiable attempt to impress station employee Angela (Monica Dolan). Director Declan Lowney’s camera lingers on Alan’s face as the desperation creeps into his eyes when he starts to think his little stunt may have backfired.

Since the character’s earliest  radioappearance, the writing by Coogan, Armando Iannucci and numerous others has been as critical to the lasting success of Partridge as Coogan’s inimitable portrayal. There have been a multitude of memorable one-liners and vignettes over the years and Alpha Papa maintains the hit rate. The moment when Alan justifies a panic attack he suffered in a car wash, blaming “a perfect storm of no sleep, no wife and angry brushes whirring towards me” is just one of many quotable lines that will have you chuckling along. 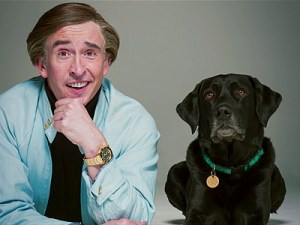 With so many comedies having failed this year to raise a titter, the ease with which Alpha Papa has you laughing out loud is testament to the fantastic writing and deft performances.