Robert Altman may have playfully described his ‘Hollywood on Hollywood’ black comedy as “a very mild satire”, but he was fooling no-one. 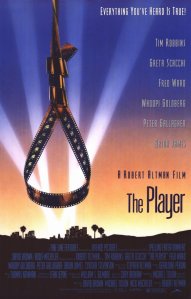 One of Robert Altman’s very best, The Player could arguably be the ultimate example of Hollywood eating itself

One of the most cynical, caustic and clever dissections of a creatively bankrupt studio system that has only become worse in the 21 years since its release, Altman’s The Player is one of the late director’s most celebrated works and, ironically, brought him back in from the cold after a decade spent making no budget chamber pieces.

Actors are a contrary lot. Happy to take the cheque and star in the sort of drivel the director mercilessly satirises, dozens of actors (whose star wattage could power a small town) lined-up to take walk-on parts mostly as themselves in order to take a gleeful swipe at the piñata that is Tinseltown’s lumbering studio system. 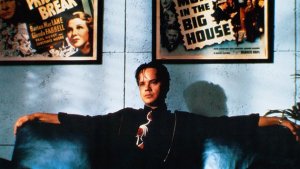 Based on Michael Tolkin’s book, Altman’s anti-hero is sleek, shark-like studio executive Griffin Mill (Tim Robbins), who’s scared he could be axed in favour of the younger, up-and-coming story executive Larry Levy (Peter Gallagher). Mill’s life is thrown into further disarray when he continues to receive increasingly threatening postcards from a writer he can’t remember whose pitch he ignored.

Everything in The Player is artifice from the very first shot of someone asking for “quiet on set” and a clapperboard shutting. A person’s word counts for nothing, false sincerity and hypocrisy is in plentiful supply and artistic backbone turns to spinelessness when money and power enter the equation. At one point, Mill bumps into Burt Reynolds, who’s all smiles until Mill walks away, at which point he calls him an “asshole”.

This most tellingly plays out in the second half of the film when pretentious English writer Tom Oakley (Richard E Grant) and producer Andy Civella (Dean Stockwell) pitch the death row thriller Habeas Corpus to Mill at a restaurant. Oakley vociferously insists it mustn’t lose its downbeat conclusion (“no Hollywood endings”) and feature no stars. Inevitably, as the studio’s claws get into the project Habeas Corpus turns into a very different movie, to the extent that has Bruce Willis and Julia Roberts as its leads and includes a tacked-on happy ‘Hollywood ending’, both of which Oakley seems happy about now it’s been made (in an example of life imitating art, one of the stars of Habeas Corpus is Susan Sarandon, who three years later teamed up with her long-time partner Robbins to make Dead Man Walking, a death row thriller).

Oakley isn’t the only writer who fails to come out of The Player smelling of roses. One pitches The Graduate: Part 2 (I’m personally amazed that one hasn’t been made) in which all the original characters incredulously still live together “in a big, old spooky house”. Another pitches “Out Of Africa meets Pretty Woman“, while a further writer’s idea for a hard-hitting politically radical film with a supernatural edge (“Ghost meets The Manchurian Candidate“) is reduced to a bland paint-by-numbers thriller after only 30 seconds in Mill’s hands.

One thing that strikes you about watching the film is just how disinterested Mill and his cronies are in watching movies (something you suspect is true for a lot of today’s execs). At an informal lunch, Mill asks those around him: “Can we talk about something other than Hollywood for a change?” The silence that follows speaks volumes.

At one point Mill gives a speech at a gala dinner in which he bangs on about the importance of finding the next John Huston or Orson Welles and the fact that “movies are art”. He unsurprisingly contradicts himself later in the film when he lists the key ingredients that make a successful Hollywood film, the most important one being “happy endings”.

Griffin Mill (Tim Robbins) says hi to the agent and Burt Reynolds, just one of dozens of cameos in The Player

The only time we see Mill actually watch a film is when he thinks he’s tracked down the mystery writer sending him death threats to an old movie theatre showing Vittorio De Seca’s 1948 neo-realist classic Bicycle Thieves and even then it’s only for the last five minutes. Perhaps underlining how there are no original ideas left in Tinseltown, Altman constantly makes references to Hollywood’s golden age, whether it be the posters of old classics in the studio’s offices or the threatening postcards featuring Humphrey Bogart and James Dean.

The late Robert Altman, director of The Player

Head of studio security Walter Stuckel (Fred Ward) complains that all films today are “cut, cut, cut” and refers to the six-and-a-half-minute opening shot of Touch Of Evil. It’s a clever, self-referential nod to the audience as he opens the film with a celebrated tracking shot lasting almost eight minutes. It’s bravura filmmaking and shows off Altman’s unique and complex Peeping Tom style of filming certain moments using a long lens that often incorporate overlapping conversations and multiple set-ups.

The film has a wicked sense of humour (in a cute piece of marketing, a poster for it includes the quote “the best movie ever made!” … attributed to Griffin Mill) that veers from pitch black satire to farce. Altman was always a pranksterish filmmaker and this knowing humour runs through the core of The Player.

Alas, The Player feels all-too-pertinent to a modern-day big studio system scrambling about in the dark for the next big thing. One of Altman’s very best, this could arguably be the ultimate example of Hollywood eating itself.

When the Tea Party movement was being formed following Barack Obama’s 2008 presidential victory, it wouldn’t have been a surprise if its founders hadn’t gotten some twisted inspiration from Bob Roberts.

Although 20 years old, Tim Robbins’ scaborously satirical mock-umentary is arguably more prescient now than it was when it was released shortly before the 1992 election involving Bill Clinton and George Bush.

The themes explored in Bob Roberts are, alas, all too pertinent to what has played out before our eyes in each and every political race, where the politics of personality, fear, image and ignorance take precedence over reality and the issues that should really matter to the electorate.

Bob Roberts is “a bold, frightening and blackly satirical warning to a sleepwalking nation of the power of style over substance”

The film follows the campaign of Repubican senatorial hopeful Bob Roberts, a folk-singing self-made millionaire-turned “man of the people” and “leader of a generation”, according to his fanatical band of acolytes (including a young Jack Black in his feature debut as a Hitler youth-alike).

Roberts and his campaign team use a sympathetic media machine to push his rabidly right-wing agenda at the expense of the principled Democratic incumbent Senator Brickley Paiste (the late Gore Vidal), who “doesn’t see anybody at home” when looking into his opponent’s soul, but is unprepared for his opponent and, when tainted by a fabricated sex scandal naively proclaims that “this is America. Virtue always prevails”.

Roberts is hounded by an investigative reporter, Bugs Raplin (Giancarlo Esposito), who pertains to have evidence that the senatorial hopeful and his campaign chairman Lukas Hart (Alan Rickman) are involved in crooked deals and drugs despite peddling an anti-drugs message as part of his campaign.

As election day draws near, a seemingly tragic incident dramatically alters the public mood, but is everything as it appears?

Although there can be little doubt as to which side of the political fence Robbins sits, the vitriol of Bob Roberts is aimed more squarely at the political system as a whole. When the system is little more than the mouthpiece of big money and lobbyists, Robbins appears to argue, then it’s hardly surprising a figure as rotten as Roberts could rise up Omen-style from its darkest recesses.

The iconography of the 60s runs through the film like a stick of rock, most notably the work of  Bob Dylan. While Robbins clearly seems to pine for the ideals of that lost decade, he is shrewd enough to observe how what’s ‘cool’ from the 60s has been perverted and monetised by the morally and intellectually bankrupt, such as Roberts, for personal gain.

While declaring that “the 60s are, let’s face it, a dark stain on American history” during an interview on a morning chat show, Roberts churns out hate-filled folk records with such Dylan-aping titles as “The Freewheelin’ Bob Roberts”, “Times Are Changin’ Back” and “Bob on Bob”. He even reinvents Dylan’s iconic video to “Subterranean Homesick Blues” as “The Wall Street Rap”, his paean to the pursuit of money.

Robbins takes the Dylan reference further by adopting the same verite-style of the classic 1967 documentary about the singer Don’t Look Back, while in one scene Roberts, who rides ahead of his campaign bus on a motorbike, falls off, aping a similar incident suffered by the folk legend in 1966.

The corporatisation of politics and its leaders is hardly a new phenomenon, but Robbins turns it all the way up to 11 here. When his campaign staff aren’t manning the phones pushing Roberts the politician from the confines of their battle bus, they’re pushing Roberts the businessman by trading stocks and shares.

While Robbins can get bogged down hammering home the point that politics and society at large has regressed from the idealism of the 60s to a more reactionary, less tolerant state, his debut film has become ever more pertinent and timely over the years. His portrayal of a media machine that wallows in trivia and allows subjectivity to superseed objectivty foretells the world of 24-hour rolling news and the likes of Fox News. Robbins also attacks the deliberate erosion of the divide between church and state, something that has now become de rigueur in politics since George W Bush and the advent of the Tea Party.

Robbins exudes an oily charisma as the titular firebrand, capturing the dead-eyed smile we’ve seen from so many politicians. Equally great is Rickman as the not-quite-human Hart and Ray Wise as Roberts’ svengali-esque campaign manager Chet MacGregor.

Bob Roberts is a bold, frightening and blackly satirical warning to a sleepwalking nation of the power of style over substance and the sobering observation that you often get the leaders you deserve.