What can I say? Ruth is something of a hero for bringing her dream to life! Please support her project – she absolutely deserves it!

It’s been forty plus years in the making. No, no, it didn’t take me 40 years to write the script, though if I had written something as an infant I might’ve been a literary genius by now.

Some of you know my life’s been consumed by my short film project lately. Well, I had just launched the Kickstarter campaign to help fund the film, so I thought I’d share the journey of how I got here…

It feels as though I’ve been wanting to make a film for as long as I remember. Even in grade school, whenever the recurrent question ‘what do you want to be when we grow up?’ came up, I always proudly answered that I wanted to be a screenwriter. Yep, even long before I knew what a screenwriter was! For some reason, I had always had this longing to follow my late dad’s footsteps, who…

The year 1993 proved to be a defining one for Steven Spielberg as he delivered not one, but two cinematic masterpieces.

A career with either Jurassic Park or Schindler’s List in it would be more than enough for most directors, but Spielberg achieved the seemingly impossible by helming both at the same time.

Both films put the bearded one back on top after the failure of his 1991 misstep Hook, with Jurassic Park redefining the blockbuster and becoming one of cinema’s most beloved thrill rides.

Viewed almost a quarter of a century on from its release, the film has lost very little of its giddy roller-coaster exuberance, achieving a winning balance of pulse-racing spectacle and character-driven drama.

Spielberg got wind of writer Michael Crichton’s novel early on and was mapping out storyboards before the book had even been finished. Crichton had become one of the literary world’s most successful proponents of high concept page-turning fiction and for Jurassic Park he lifted the blueprint of his 1973 sci-fi drama flick Westworld (which he also directed as well as wrote) to create a theme park whose main attraction (destructive dinosaurs instead of rampaging robots) soon gets out of control.

What strikes you about the film is just how many of its characters are either suspicious, uncomfortable or downright hostile to the concept of resurrecting creatures 65 million years after they had been wiped out.

The park’s game warden Robert Muldoon (Bob Peck) thinks the whole idea of inviting tourists to the Costa Rican island inhabited by the myriad prehistoric creatures is foolhardy (in spite of the fact he’s being paid by the same man whose venture this is), while paleontologist Dr Alan Grant (Sam Neill) questions how anyone could honestly know what to expect (in spite of accepting money from the same man whose venture this is).

The most critical voice is reserved for Dr Ian Malcolm (Jeff Goldblum), an advocate of chaos theory who attacks park owner John Hammond (Richard Attenborough) both for his hubris and abuse of power after they learn of how the park came to be through the animated Mr DNA presentation (still one of cinema’s most inspired exposition dumps). 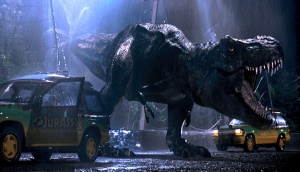 Although Malcolm, like Grant and fellow paleontologist Dr Ellie Sattler (Laura Dern) are initially gobsmacked at what Hammond has managed to pull off, the reality of what the park represents horrifies him. Indeed, as he later says in Spielberg’s 1997 Jurassic Park sequel The Lost World: “Oooh, ahhh, that’s how it always starts. Then later there’s running and… screaming.”

Like Jaws almost two decades earlier, Spielberg knows that delivering the goods too early dilutes the impact of the main event and, following several teases, finally gives us a taste of what’s to come with the reveal of the Brachiosaur towering above the protagonists. It remains a spine-tingling moment that’s completely sold by the stunned reactions of Grant and co.

Spielberg also knows that we, like the main characters of the film, are also suckers for grand pageantry and unashamedly hands it to us while planting the thought in our head that, if a Jurassic Park were to actually exist it would undoubtedly be a Very Bad Idea.

In spite of the technology’s relative infancy, the CGI on display stands up remarkably well; an indication that, when done with care, attention and real skill, computer generated effects can be a boon rather than a way to cut corners (The Scorpion King, anyone?).

The film’s central T. Rex attack on the disabled eletronic cars is a masterclass in building suspense – achieved through a sublimely simple shot of water rippling in a glass of water as the danger approaches. Spielberg effectively uses life-sized animatronics in the close-ups of the T. Rex assaulting Hammond’s grandchildren Tim (Joseph Mazzello) and Lex (Ariana Richards), which lends the scene added weight (the sometimes unpredictable nature of the animatronic meant that its actions would catch the cast off guard).

Other inspired uses of special effects include the herd of CGI Gallimimus flocking past Grant, the kids and the camera, and the memorable image towards the end of the film of the velociraptor enveloped by a computer screen’s display. While the T. Rex is the big daddy, the Jurassic Park‘s biggest threat remain the agile, ferocious ‘raptors and they are used to full effect in the celebrated kitchen escape sequence (a scene Spielberg would carbon copy in his under-appreciated adaptation of War Of The Worlds in 2005).

The sound design is also striking and underlines the danger that lurks all around our stricken heroes. Each dino is given their own call, with the T. Rex’s bone-shaking roar achieved by slowing down the sound of a baby elephant and the ‘raptor’s bark the product of tortoises having sex (!).

The sound is matched only by John Williams’ majestic score, which suits the enormity of the creatures, while dialling it down for the more contemplative moments that are interspersed between the mayhem.

The incredible success of 2015’s Jurassic World confirms, if it were needed, that we’re all suckers for dinosaurs on the big screen. However, originals are often the best and in the case of Jurassic Park it remains a blockbuster classic almost without rival.