For a supposedly ‘unfilmable’ novel, Jon S. Baird has made a pretty impressive stab at bringing Irvine Welsh’s blackly comic tale of cops, corruption, cocaine to the big screen. 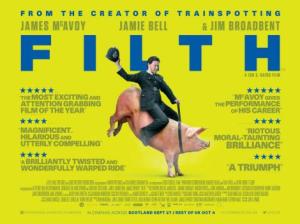 Filth may live up (and down) to its title, but from the gutter comes a darkly funny, uncompromising and uniquely British moviegoing experience that has at its core one of the year’s very best performances

This is helped in no small part by James McAvoy, whose powerhouse central performance as bent Detective Bruce Robertson makes Abel Ferrara’s Bad Lieutenant look like Dixon of Dock Green. 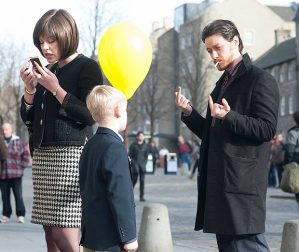 Robertson is one of the most memorable characters in Welsh’s arsenal of literary creations, an utterly squalid and repellant human being who’s prepared to back-stab, double-cross and shaft his way to a promotion within Edinburgh’s Lothian constabulary.

The veneer of superiority, cockiness and self-entitlement starts to crack, however, and the self-loathing, insecurity and nihilism that’s always been there creeps to the surface as Robertson implodes in a shitstorm of cocaine, pills and hard liquor. 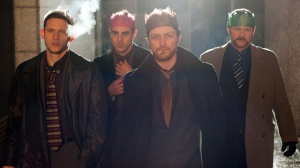 On the face of it, Filth sounds as appealing a prospect as spending the day with its central character, but Baird (who also wrote the screenplay) understands there has to more to Robertson than the monster we first see.

Danny Boyle and screenwriter John Hodge overcame a similar challenge when working on Welsh’s Trainspotting by finding the humanity – and humour – within a group of heroin addicts. It’s a tough nut to crack, but McAvoy somehow manages to elicit our sympathy for a character whose litany of truly abhorrent deeds would normally have you rooting for his grisly demise. Using his strikingly expressive eyes, McAvoy show the pain that undercuts the rage and mischievousness, a pain that’s rooted in a tragic back story that gradually reveals itself. 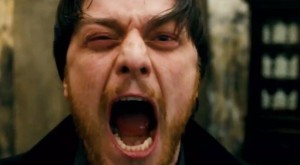 I’ve never been McAvoy’s biggest fan, thinking him too lightweight an actor for the demands of the characters he’s played in the likes of The Last King Of Scotland and this year’s Welcome To The Punch. However, in what’s by far his best performance to date, he brings a real physicality to the role, supplanting those boyish good looks with a bloated demeanour and scraggly beard. 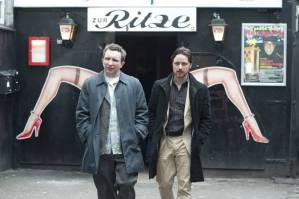 Robertson may a nasty piece of work, but most of those around him are far from perfect. His colleagues are mostly either bigoted, homophobic, useless or coke-heads, while others around him paddle in the same moral sewer he dives into. Perhaps the only truly ‘good’ person he knows is his only real friend, Bladesey (Eddie Marsan), although even that’s tainted due to the fact he’s targeting his vampish wife Bunty (Shirley Henderson) with anonymous dirty phone calls.

Both Marsan and Henderson (who also recently played a married couple in the acclaimed UK miniseries Southcliffe) are both as excellent as you’d expect, as are many of the supporting cast, including John Sessions as Robertson’s colourful boss Bob Toal, Gary Lewis as the nice but dim Gus Bain and Jamie Bell as Robertson’s coke-addicted partner Ray Lennox. 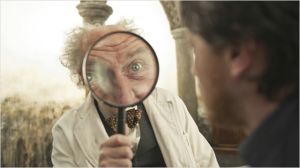 Jim Broadbent also gets to have some fun playing a massively over-the-top Australian shrink, the talking manifestation of a tapeworm inside Robertson’s body that’s assisting his mental collapse. The ‘talking tapeworm’ sections of Welsh’s book were always going to be a particularly challenging trick to pull off and, it has to be said, it doesn’t quite work; if for no other reason then it’s not made terribly clear to those who haven’t read the novel what Broadbent’s character is supposed to represent.

In a nice touch, the car Robertson drives (and occasionally sleeps in) features ‘KES’ as part of its number plate, a nod to Ken Loach’s iconic debut film of the same name.

Filth may live up (and down) to its title, but from the gutter comes a darkly funny, uncompromising and uniquely British moviegoing experience that has at its core one of the year’s very best performances.