Part of the gamble you take when attending these things is that you can sometimes fork out a chunk of change for what can best be described as a disappointment. 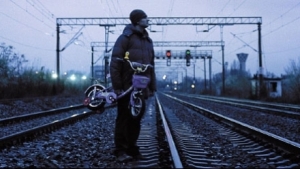 I went into Cristi Puiu’s Aurora with hopes at a reasonable height. Puiu’s last film The Death Of Mr Lazarescu (2005) pretty much launched the Romanian New Wave, a movement that has led to such works as 12.08 East Of Bucharest (2006) and the masterpiece 4 Months, 3 Weeks And 2 Days (2007).

The fact Aurora was three hours long also wasn’t a particular issue – I had managed five-and-a-half-hours for Carlos, after all. However, while Carlos was 330 minutes and felt nothing like that length, the 181 minutes of Aurora felt like 181 hours.

Aurora follows Viorel (played by the director) over the course of 36 hours. We first see him awake and naked next to his lover, before he goes to work, purchases a 12-gauge shotgun and makes use of it on a series of unwitting victims.

Puiu plays Viorel as a man of very few words, an implacable automaton who is given to bouts of shocking violence (similar in many ways to the protaganist in the rather more effective Chilean film Tony Manero (2008)).

The robotic ways Viorel goes about his business are reflected in the long takes Puiu uses, whether it be walking back and forward in his flat or driving a borrowed car. The moments of violence are undoubtedly shocking (which is obviously the point) and it is only at the very end when Viorel hands himself in to the police (the best scene in the film by far, played out with deadpan humour) when the reason for his actions is explained and the connection between the victims is established.

In the post-film Q&A, Puiu defended the lack of action without someone having asked him to do so, stating that in real life not many of us can catalogue a series of exciting events over 36 hours, so why should his central character?

It’s a fair point, but we need to at the very least engage with, understand or feel something for the characters before us, otherwise our patience can wear thin pretty soon, as it did here I’m afraid.

The festival’s hottest ticket is always its Surprise Film and I was keen to see what the LFF team would be serving up this year. As previously mentioned, festivals are a lottery and the Surprise Film is the biggest gamble of all. However, if previous years were anything to go by (The Coen Brothers’ No Country For Old Men in 2007, The Wrestler in 2008 and Michael Moore’s Capitalism: A Love Story last year) then expectations were certainly high.

In the end we got Brighton Rock. 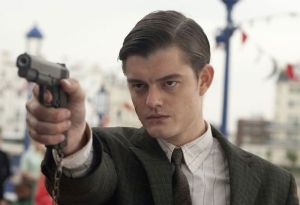 The original 1947 film pretty much defined British noir and helped to make a household name out of Richard Attenborough.

This latest version, which screenwriter/director Rowan Joffe was at pains to stress in the post-film Q&A was not a remake, is rather a new version of Graham Greene’s source novel.

Whatever Joffe says, it’s nigh-on impossible not to compare it to the Dickie Attenborough classic, though, and it’s here where his version starts to fall down.

That said, the first 20 minutes is highly effective, with a honking score playing over the film’s opening gangland killing and the revenge that follows. But as soon as Sean Harris’ shifty Hale is dispatched in a scene that begins on Brighton Pier and ends on the pebbled beach beneath it, the momentum that’s been building since the first frame suddenly withers away and a whole new, far inferior film takes its place.

To give his Brighton Rock its own identity, Joffe places the film in 1964, as opposed to the post-war setting of the original. This gives the film an extra bite as mods square up to rockers in a Britain whose youth are angry and not going to take it any more.

Although it kind of makes sense on paper, by shifting away from a war-weary post-war society where thugs like the central protaganist Pinkie are able to thrive to the mid-60s just doesn’t work in practice. The Pinkies of this world no longer seem to fit and feel like exactly what they are, by-products of another age.

Likewise, the character of Rose (Andrea Riseborough) feels like someone out of time. This is an era when women were starting to flex their political and societal muscles, so to have a character who is so deluded in her slavish devotion to Pinkie doesn’t convince. The scene in which she takes it upon herself to purchase a fashionable new dress is the one moment the 60s setting works for the character, otherwise she’s lost in another time and another film.

And what of Pinkie himself? While Attenborough gave his gangster a heart, albeit one that beats to a particular nasty tune, Sam Riley may have the look and the voice but gives Pinkie about as much depth as a stick of Brighton rock. There’s nothing going on behind Riley’s eyes and his sudden transformation from scared young man to sociopathic murderer doesn’t wash.

Hats off to Nonso Anozie for elevating  Dallow from the sweary henchman he could so easily have become, while Phil Davis get the tone just right as an aging gangster desperate to escape. But a starry cast, including Helen Mirren, John Hurt and Andy Serkis are wasted in sub-standard roles which require little or no work on their part.

At the end of the film, the person next to me commented to his girlfriend: “Brighton Rock? Shite-on Rock more like”, which kind of sums it up really.